My passion for Punch started at a young age when my aunt’s father performed his show in the dining room one Boxing Day afternoon. He was an amateur, who had been given the Punch and Judy puppets by a family friend. I can’t even say the show was that good, but it started something in me. Whenever I would see a Punch and Judy show I would have to watch it all, as many times as possible. It must have been a long week in Weymouth for my mum when I was 4 watching Guy Higgins’ show over and over again!

Eventually after being bought one puppet each birthday and Christmas, I worked up a set of puppets, and had got my first booth. I secretly put an advert in the yellow pages advertising my show. Soon the phone calls and bookings rolled in. I was 12 when I posted that advert, and I’ve been performing professionally ever since!

I have been lucky to perform in such varied places from a grade 1 listed barn, to a butcher’s shop window surrounded by turkeys. In 2016, after spending holidays with Mark Poulton on the beach at Weymouth and working other busking pitches, I took a jump into the deep end to perform my show daily (weather permitting) on Swanage beach during the summer. It’s a joyous way of life; I wouldn’t have it any other way!

When I am not working on the beach I perform private bookings in the corporate and events sector. Not only am I a performer, I am a puppet costumier, creating and restoring costumes for some of the world’s largest collections of Punch related artifacts, as well as for other performers.

Although we are classed as ‘Professor's’ I will always be a student, willing to learn more about Punch and expand my skills related to him. Here’s to many years of friendship ol’ red nose! 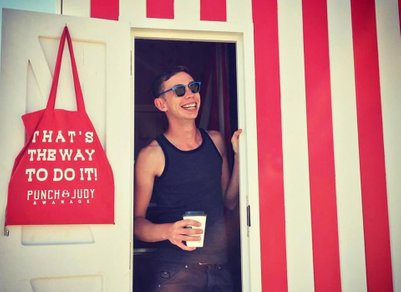 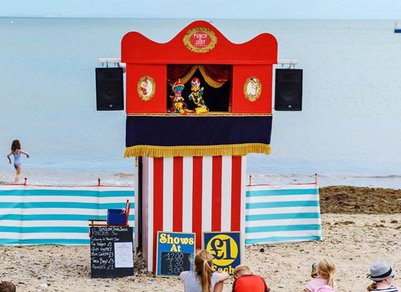