READ ALL ABOUT IT!

Members of the Punch and Judy Club are available for press, television and radio interviews, and have appeared throughout Europe, America and Australia promoting this British folk hero.

The organisation also has a large archive of vintage and contemporary images available for use, as well as an original Victorian Punch and Judy Show to hire for period dramas.

WHERE DOES MR PUNCH COME FROM?

Punch and Judy has been rebranded a few times. He first came to England as a continental string puppet Pulcinella, from the Italian Commedia del’arte. His name was anglicized to Punchinello and then abbreviated to Punch. He’s even had a new wife, originally being married to a puppet called Joan. It’s thought that when the name Joanie was said in Punch’s distinctive squawking voice it was misheard as Judy, which, being much easier to pronounce with the swazzled voice, has stuck.

IS MR PUNCH A REAL PERSON?

No he isn’t, though many masked actors played Pulcinella in the Commedia del’arte shows. However a number of the other characters in Punch and Judy are based on real people. Joey the Clown is modelled after the famous Regency and Victorian clown Joseph Grimaldi, star of Drury Lane. Grimaldi was the most famous entertainer of his day and Punch Professors were keen to capitalise on his success and include him in their shows. Victorian and Edwardian shows regularly included a hanging sequence, with Mr Punch escaping the noose and tricking the hangman. The hangman character was usually called Jack Ketch, based on an infamous executioner employed by Charles II.

YOU DON'T SEE HIM AT THE SEASIDE MUCH THESE DAYS DO YOU?

Many of us associate Punch and Judy, along with wonky deckchairs and sticks of rock, with the seaside. And Mr Punch can still be found on the sands these days, most notable on the historic seaside pitches of Weymouth and Llandudno. However the show has always gone with the crowds, and the Professors of the past only moved to the beaches during the Victorian era as the seaside holiday rose in popularity. With the rise of foreign travel the numbers of holiday makers on British beaches diminished, as did the number of Punch and Judy Shows. The Punch Professors moved on and found new audiences at fetes and fairs, in shopping centres and schools. 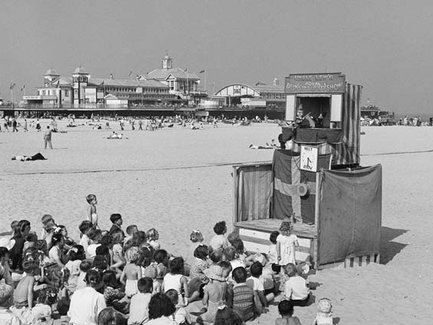 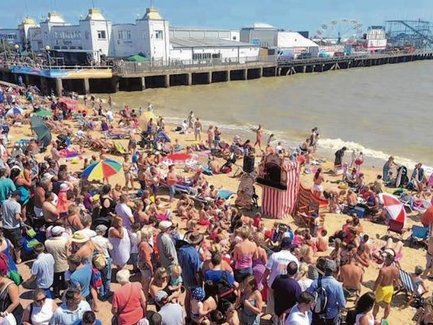 I THOUGHT THEY'D BANNED ALL THIS?

Mr Punch has never officially been banned by any council, event or man with a clipboard. This is a commonly held myth and the Punch and Judy Club are keen to quash this rumour. Mr Punch is welcomed by all with a sense of humour, in fact many councils book Punch and Judy on a regular basis as they know how many people can enjoy a good performance in one go. Pound for pound Mr Punch is a very cost effective entertainer!

BUT ISN'T IT ALL TERRIBLY VIOLENT?

In a word, no!  Watch the audience whenever a puppet gets a whack from Mr Punches stick, they don't recoil in horror; they laugh! What they are watching is 'Knockabout Comedy' and certainly not 'Violence'. Mr Punch may have a stick, which he uses with gusto, but his stick is a ‘Slapstick’.  Slapsticks were first used by Pulcinella - the human version of Mr Punch - in the Commedia del'arte street shows in Italy, to make a loud slapping noise...and crucially not to hurt the live Actors in the process. This is the very root of the term ‘Slapstick Comedy’ and it is what makes Circus Clowns, Laurel and Hardy and The Simpsons so popular.  When you add an element of comedy, which we always do, together with the correct timing, this makes for a traditional, entertaining show in the slapstick style, and that is what children love.

Mr. Punch has never professed to be a moral guardian or an example for us all to follow, which is lucky as very few people would suit his jester’s costume and squeaky voice!  Indeed part of his charm is that Punch does not feel the need to conform. He is an irreverent prankster, often doing the 'wrong' thing just because he can!  The children in the audience can see this; they laugh at Punch because they know he is behaving in a way they are not supposed to themselves. Throughout Punch’s history there have always been humourless adults that want to project their own morality and rules onto the show. Charles Dickens answered this tricky issue over a hundred and sixty years ago:

“In my opinion the street Punch is one of those extravagant reliefs from the realities of life which would lose its hold upon the people if it were made moral and instructive.I regard it as quite harmless in its influence, and as an outrageous joke which no one in existence would think of regarding as an incentive to any kind of action or as a model for any kind of conduct.  It is possible, I think, that one secret source of pleasure very generally derived from this performance…is the satisfaction the spectator feels in the circumstance that likenesses of men and women can be so knocked about, without any pain or suffering.” 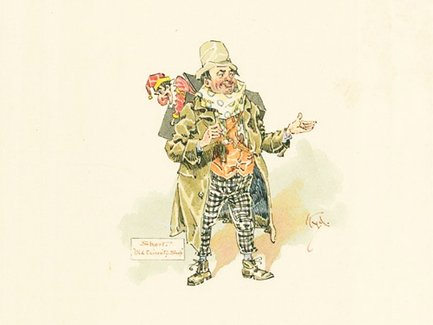 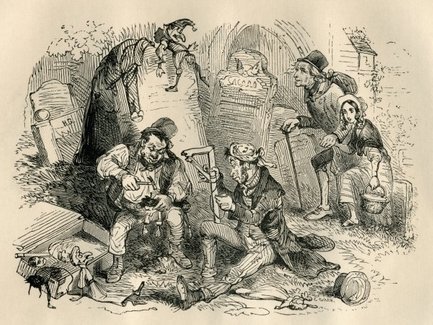 The following is from a published article by Geoff Felix

About every three years or so, usually during the "silly season" someone tries to ban Punch and Judy. There is nothing new in this but the newspapers and media run with it because people thrive on conflict and controversy. Why is it nonsense, why is it nothing new and why is it cause for concern?

It is cause for concern because some people in a misguided attempt to protect children, might in fact be robbing them of the chance to enjoy our national puppet. Punch has been here for over three hundred and forty years and is part of our culture. It is nothing new because people have been trying to ban it since Dickens, who in reply to a letter in 1849 wrote:

"In my opinion the street Punch is one of those extravagant reliefs from the realities of life which would lose its hold upon the people if it were made moral and instructive. I regard it as quite harmless in its influence."

In order to prove that all this is nonsense however we have to examine the show itself.

Punch is basically slapstick humour. The stick he holds is especially constructed to make a thwacking sound without causing damage. It is where the term originated. You see this type of humour in Laurel and Hardy, Tom and Jerry, in pantomime and even in today's computer games. The show which has its origins in the 'commedia dell'arte' is rooted in conflict which is at the basis of all drama - be it a conflict of ideas or of the more physical type. A fight draws a crowd. Has anyone seen a boxing match or wrestling? Who can fail to be delighted when Kermit gets one in the chops from Miss Piggie? The further he hurtles through the air, the more they laugh. It was only natural for Mr Punch in about 1740 to do what all glove puppets do best, pick up a stick and fight - just like puppet knights in the earliest known puppet show illustration.

Does this damage children? The answer is no and for the following reasons:

They know the difference between a puppet show and real life. If it isn't obvious enough then point to the theatre and scenery and have a discussion afterwards.

They know the difference between being well behaved and naughty, that is the parents' job remember?

The action is stylised slapstick and should be funny, not vicious. It's interesting that several unsuccessful attempts have been made to do the play with actors and they have always failed. It is because it works best as a puppet show and only that, and Punch's special voice further removes him from the realistic. If Sylvester the Cat took Tweetie Pie and toasted him over the fire on a crumpet fork to make a Tweetie Burger it would be comic, but take a real budgerigar, someone's pet and burn it alive, it would be disgusting. So it is how you present the material.

Some people have argued that the show "normalises brutality". Not so. Now if the child is brought up in a household where a real mum is hit by a real dad, that is normalising brutality. We would be right to object. But if you look at the children of Punchmen and women who must have watched hundreds of shows, they are just the same as any kid. I know of one Punchman who never once smacked his children but the show was gloriously violent. They grew up well. It is interesting that the only two societies that really succeeded in suppressing their national puppet characters (Nazi Germany and Stalinist Russia) did so against a background of unimaginable brutality. As Kasperal and Petrushka became more sanitised, so things got worse for the people. It was the free and independent spirit the characters represented that the regimes feared most. People from America who don't understand our traditions and have no memories of British childhood have also tried to censor the show - yet they still give their children real guns to play with. Today's parents, grandparents and great grandparents all saw Punch and it did them no harm. Show me the child that has been damaged by Punch and I will show you the hundreds that have been damaged by politics and religion. It's a sad state of affairs that instead of concentrating on the broad problems of society, people focus on a detail. It's a bit like banning wine gums because some people have a drink problem.

One could also argue that by showing children some of the darker things in abstract form it helps them to come to terms with the world around them. This is the function of fairy tales and I would point the reader in the direction of the Brothers Grimm. The sanitised fluffy world of Teletubbies and Magic Pixies is fine for under - fours but the six year olds and upwards reared on computer games and The Simpsons want something with guts.

So am I saying that Punch is the most perfect thing since sliced bread? No. He is only as good as the performer in front of you. Some are good, some are mediocre, some are truly dreadful. Once in a while a great Punchman arrives. They understand that the secret of a good show is to have a sense of humour and a knowledge of its traditions. But these, like truly great actors, are few. So if you saw a show and didn't like it blame the showman, not Punch.

In recent years there have been moves among Punchmen to raise standards and the formation of organisations and regular festivals have helped this.

Most showmen hold on to the memory of their own childhood experience. Many are driven by a passion for Punch because, believe me, when a show goes well there is nothing like it. It is a remarkable experience and one which the child will always remember. It is a precious thing, too good to throw away - ask the kids.

Geoff is a puppeteer whose credits includes the Walt Disney Company, The Jim Henson Company and Warner Brothers, a talented puppet maker and a veteran Punch and Judy Man. He is a founding member of the Punch and Judy Club.