Like so many other Punch and Judy Professors I first fell in love with the funny little fellow at the seaside, at Criccieth, North Wales, to be precise, in a grand old show presented by the mysterious Dr. Maldas. Ever since then I have tried to recreate those feelings of excitement and wonder for my audiences.

I developed my own show whilst still at school in the North West, with the help of local puppet master Chris Somerville of the Harlequin Puppet Theatre. Chris’s high standards prepared me for my first professional show amongst the buskers of Covent Garden, the birthplace of Punch and Judy.

This early grounding in puppetry, and studying theatre at the University of London has led on to performing all manner of puppets in national theatrical tours, music videos, on television and in film. I was also the puppeteer behind Gold TV’s recent show Punch and Judy: Rebooted, working for Taylor Herring PR developing the show, and performing across the country after a national press launch in Covent Garden, gaining one million YouTube views.

I tailor each show to the individual event, depending upon the bookers' requirements and the audiences at each performance. No two shows are the same, the level of

interaction between the puppets and the audience is one of the key elements that keeps Punch and Judy alive, giving it a special place in the audiences' hearts; it is Coronation Street with the television screen removed!

I always strive to put on the best show possible, like the best pantomime Punch and Judy can be a child’s first taste of theatre, and it should be glamorous, exciting and utterly captivating. I hope my audiences are as enthralled and entertained by Mr Punch today as I was all those years ago. 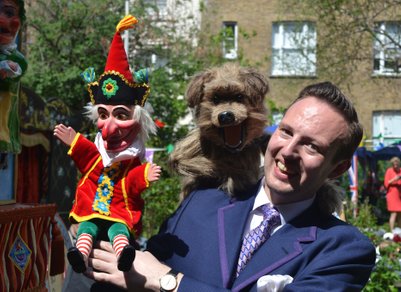