I’ve been performing Punch and Judy since a chance encounter on Weston Super Mare beach aged five. I came back to London, and with the help of my grandfather, Peter Crocker, started devouring every snippet of information I could find, as well as watching every show possible.

This lead to me discovering the wonderful Punch and Judy shows in Covent Garden performed by Percy Press Jnr and his brother Leslie. After a few months of watching from the side-lines Percy asked me if I would like to have ago at performing. They taught me the traditional show and during my teenage years I was performing up to ten shows a day in Covent Garden, on the same spot that Samuel Pepys first saw Punch’s Puppet Show in 1662. This gave my show a great grounding and I still include as many of the old, traditional routines as possible. I left Covent Garden to take over as Clacton on Sea’s Punch and Judy Man, performing on the sands there for a number of years, before returning to work in Crystal Palace Park for nearly twenty years.

As a keen collector of puppets, I’ve amassed at least a thousand examples over the years, including some fine Victorian Punch and Judy sets, radio star Peter Borough’s Archie Andrews, and the iconic puppets used by Tony Hancock in his film,

The Punch and Judy Man. Through my expertise with old puppets and puppetry paraphernalia I’ve been called into prestigious auction houses and museums to value and catalogue collections, as well as curating museum displays and loaning antique puppets for use in plays and films.

Nowadays the majority of my work is split between the corporate sector, and smaller family events and parties, something a lot of my colleagues avoid, but I’ve always enjoyed entertaining children, they are the best critics and they laugh the loudest too! 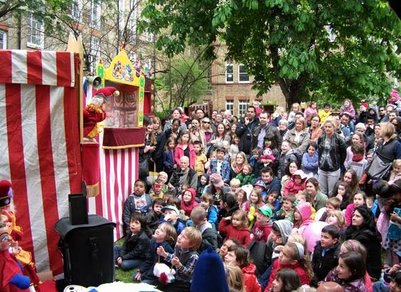 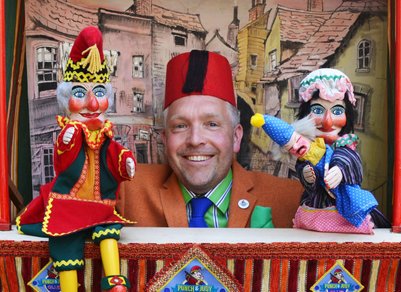