My name Is Christopher Drewitt and I'm a third generation Punch and Judy Man, following in the footsteps of my grandfather Harry and my father Anthony.

Having learnt a lot of stage skills whilst a Prisoner of War in Stalag 4B my Grandfather decided to take up Punch and Judy and Magic after the War and become a Children's Entertainer working through an agent, George Wallman, Punch and Judy Man at Blackpool Tower. As my Father got older he decided he wanted to follow Granddad's footsteps and took up Mr Punch as well to become a children's entertainer.

When my parent’s married they decided to combine their skills, setting up Pauline's Puppets in 1972, taking booking for my Grandfather and Father. My mother Pauline, having always been interested in the stage decided to learn Punch and Judy and magic from my Father and become an entertainer herself and became a part of the family firm not only manning the phones with the bookings but going out to shows of her own.

Growing up I would be taken by my family to one of their shows each weekend and before long I would know their routines off by heart! In 1991 aged 9 my Mother

entered me into the Young Professors Competition at Covent Garden. My Grandfather had built me a small red booth for a Christmas present and I used a set of puppets he had found in a shop in Eastbourne, they were light as a feather and did the job for my first ever public performance winning a slap stick from Bryan Clarke. I’ve never looked back, and very soon I was going out to all different types of bookings and here I am 24 years later still performing Punch and Judy all over the country.

It’s fascinating to look back at history to see how the Victorians performed Punch, right through to see how it changed in the 1950's and see what Punch men and women do today. I hope to carry on the tradition of Punch and Judy for many years to come, always hoping to improve on what I've learnt over the years and stride to be the best performer I can. It is a great honour and privilege to have been asked to join The Punch and Judy Club. 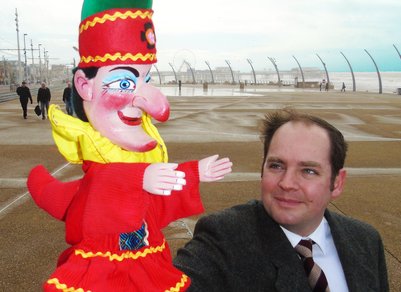 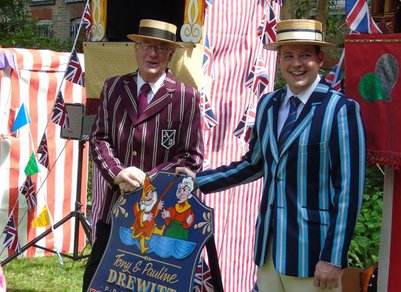